Marianne Williamson – Representative of Ideas Whose Time Has Come

First time I heard Marianne Williamson speak, she stood at a podium in front of about 1000 people who wanted to commemorate what was said to be the birth of a new era. 2012 was about to end. Excitement about the new-ness of so many things was everywhere. Awareness of the potential for so much more awareness was unspoken but almost palpable. And we applauded speaker after speaker with hope and faith.

Then Marianne was introduced. About two minutes later, everyone present was on their feet, not just applauding, but 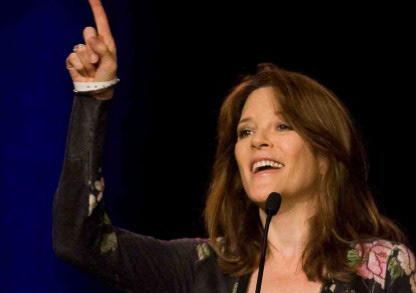 loudly, emphatically, intently roaring in passionate agreement with what she had to say.

Marianne’s message strikes a chord with people who are living and leading a revolution in consciousness that’s undeniably taking place and growing fast. She’s a beacon of light in that awakening as she stands at microphones and reminds us what we already instinctively know: that, worldwide, peace and prosperity are within reach, and that there’s no doubt people can now create it together.

When she finished, as the standing audience was bringing down the roof with applause and shouts of support, I stepped into the lobby. A moment later, I unexpectedly found myself standing next to her, and had the enormous pleasure of expressing to her my heartfelt thanks, respect, and praise. She humbly, and genuinely, asked “Did that come off all right?”

Second time I heard her speak she was running for U.S. Congress. Her presence there – or anywhere — will be like a rising tide that lifts all the boats, or the transition from black and white to full living color, or a gentle rain on a parched garden.

Marianne Williamson is speaking the truth of ideas whose time has come. As Victor Hugo said, that is something all the armies of the world cannot stop.

“Our deepest fear is not that we are inadequate. Our deepest fear is that we are powerful beyond measure. It is our light, not our darkness that most frightens us. We ask ourselves, Who am I to be brilliant, gorgeous, talented, fabulous? Actually, who are you not to be? You are a child of God. Your playing small does not serve the world. There is nothing enlightened about shrinking so that other people won’t feel insecure around you. We are all meant to shine, as children do. We were born to make manifest the glory of God that is within us. It’s not just in some of us; it’s in everyone. And as we let our own light shine, we unconsciously give other people permission to do the same. As we are liberated from our own fear, our presence automatically liberates others.” —Marianne Williamson in her book A Return to Love.