Beethoven’s life was as moving as his music, and the story is well told in a book called Beethoven – The Music and The Life. 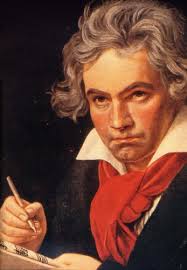 Beethoven started learning about music before he was six years old from his alcoholic father, who reportedly beat and confined him, and deprived him of sleep. At age 14, Beethoven started working as an “Assistant Court Organist” in order to support his family. When he was 17, he traveled from Bonn to Vienna to find out if Mozart would take him as a student. Shortly after he got there, Beethoven was informed his mother was dying. He immedately started the long journey back home, suffering asthma and other illnesses himself, and was never able to return to study with Mozart.

Before he was 30, as it was becoming clear that he was one of the best musicians of his era, he started losing his ability to hear. He wrote about this, and many other hardships, in letters you can read on the Gutenberg.org web site.

…You must know that one of my most precious faculties, that of hearing, has become very defective; even while you were still with me I felt indications of this, though I said nothing; but it is now much worse. Whether I shall ever be cured remains yet to be seen; it is supposed to proceed from the state of my digestive organs, but I am almost entirely recovered in that respect. I hope indeed that my hearing may improve, but I scarcely think so, for attacks of this kind are the most incurable of all. How sad my life must now be!–forced to shun all that is most dear and precious to me…

…To give you some idea of my extraordinary deafness, I must tell you that in the theatre I am obliged to lean close up against the orchestra in order to understand the actors, and when a little way off I hear none of the high notes of instruments or singers. It is most astonishing that in conversation some people never seem to observe this; being subject to fits of absence, they attribute it to that cause. I often can scarcely hear a person if speaking low; I can distinguish the tones, but not the words, and yet I feel it intolerable if any one shouts to me. Heaven alone knows how it is to end! Vering declares that I shall certainly improve, even if I be not entirely restored. How often have I cursed my existence!…

…A physician told me that he knew a deaf and dumb child whose hearing was restored by it (in Berlin), and likewise a man who had been deaf for seven years, and recovered his hearing. I am told that your friend Schmidt is at this moment making experiments on the subject. … I am now leading a somewhat more agreeable life, as of late I have been associating more with other people. You could scarcely believe what a sad and dreary life mine has been for the last two years; my defective hearing everywhere pursuing me like a spectre, making me fly from every one, and appear a misanthrope; and yet no one is in reality less so! This change has been wrought by a lovely fascinating girl [undoubtedly Giulietta], who loves me and whom I love. I have once more had some blissful moments during the last two years, and it is the first time I ever felt that marriage could make me happy. Unluckily, she is not in my rank of life, and indeed at this moment I can marry no one; I must first bestir myself actively in the world. Had it not been for my deafness, I would have travelled half round the globe ere now, and this I must still do. For me there is no pleasure so great as to promote and to pursue my art…

He’d lost his hearing completely by the time he was 44. Neverthless, and even when he was bedridden with serious illness, he kept on composing. And centuries after his death, the magnificent sounds he created are still heard around the world every day.